Ethics in business: formalism or an instrument of change?

Today, the concept of ethics in business is widely discussed from the history of the question as a philosophical definition of justice during the time of Plato and Aristotle, to law enforcement practice and correlation with modern Russian legislation.

But in this article, I want to dwell on the delicate question of the verge of separation between the declaration and the essence, between the letter and the spirit of ethics in business.

Why do companies adopt the Code of Ethics?

If you ask the question: “Do you support the introduction of a Code of Ethics in your company?”, the answer will be more than obvious. "All for all good, against all bad." But this question is much deeper. And if you decide to implement a Code of ethical conduct, so that it really becomes the core of the organization, or you sign a document on its adoption, you need to determine a firm position for yourself on a number of issues:

If you do not have a positive answer to these questions, then the implementation of the Code of Ethics can cause the opposite effect in the company and cause serious damage to development. Here, the term “integrity” in the meaning of “sequence” is just appropriate.

It is naive to believe that all employees of the company are crystal-clear people without flaws. This is definitely not the case. There is such a judgment that in society 10% are absolutely honest people, 10% are “moral freaks”, and the behavior of the remaining 80% is determined by external factors.

The Code of Ethics and its application in the company should be this “external factor”.

There are people in the team:

The introduction of ethical standards of conduct should not set itself the task of repression, but the education and evolution of moral ideas.

And if the need for change is sincerely and unanimously recognized, and the idea of transformation is supported by the top management and stakeholders of the company, cultural evolution is possible. But it also happens when the degree of neglect is such that you can only “drop the atomic bomb” and build it “from scratch”. You need to be prepared and predict crisis actions.

Let me give you an example: a European company operating in Russia; at the headquarters level, a decision is made to implement an ethical code of conduct in all business units and countries of the Group. CEO in Russia, realizing that the situation in a number of divisions is “far from ideal”, does not take measures to improve it, but agrees to “internal compromises”. The employees were given orders like: "I don’t care what you do, the main thing is that it looks like legal." Naturally, these “put up a facade” could not exist for long. The result is a change in the senior management of the Russian office. This is not always the case, but this example demonstrates the importance of having an ideological sponsor (with authority and interest in success) in any transformation.

The nature of people is the same, but the question of ethical behavior in the United States, Europe and Russia has a different degree of maturity. This can be seen in the example of the corruption component. 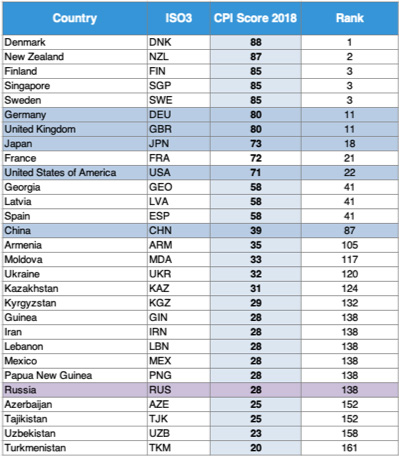 According to the international anti-corruption movement Transparency International, in the Corruption Perceptions Index (CPI) for 2018, Russia ranks 138 out of 180. Papua New Guinea, Lebanon, Iran, Guinea and Mexico took the same place.

Corruption Perception Index is a composite index that measures the level of perception of corruption in the public sector of various countries. It is compiled on the basis of surveys of experts and entrepreneurs conducted by independent organizations around the world, and has been published annually since 1995. The countries of the world are ranked on a scale from 0 to 100 points, where zero indicates the highest level of perception of corruption, and one hundred - the lowest.

In modern history, issues of business ethics began to rise loudly in the 1970s in the USA against the backdrop of scandals about false advertising, bribery and insider trading. In the 1980s, ethical principles in business began to be formalized in Europe and Japan, and since the beginning of the 2000s and around the world through organizations such as the UN, international exchanges and banks.

Russia (the Soviet Union), meanwhile, had a different path. In 1961, the "Moral Code of Communism Builder" was adopted, but due to the huge differences between declarative Soviet ideology and real life, it is a thing of the past with the Soviet regime. And only after almost 20 years, the principles of ethics began to take shape in Russian business. First of all, thanks to the "western" companies that work in Russia, and international regulators. A study by Transparency International demonstrates the high level of toxicity of the business environment in Russia, while there is an unconditional demand for change in society.

I recently asked this question at a seminar on business ethics, to my surprise, opinions were divided, and a discussion arose. Moreover, for managers representing international companies, the answer was more obvious.

We conducted a small survey in the social group of procurement managers. The results are encouraging: 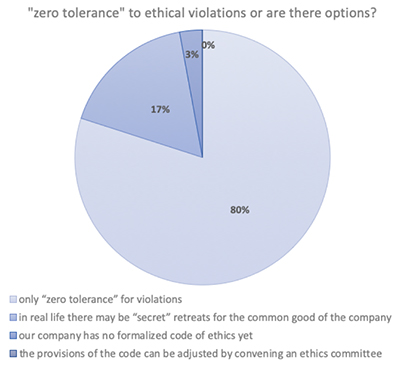 Why is the "Code of Ethics of Communism Builder" gone down in history? The reason is double standards: ordinary people and party bosses had a completely different level of access to material goods, health care, information ..., while declaring "intransigence to injustice, parasitism, dishonesty, careerism, money-grubbing."

The principle of "double standards" is the "killer" of the principles of ethical behavior.

How do these “double standards” come about? People appear in the team who interpret the Code of Ethics differently, “adjusting” its interpretation to different situations, who seek a compromise in corporate values, follow them selectively or ignore them altogether, explaining their actions by “maturity” and situational “flexibility” to “general commercial good "company. And the most dangerous thing is that others are convinced of this.

Here is a very common example: a fire check of an existing commercial facility takes place, a number of violations are detected, but company X appears, "close to the structures", ready to "eliminate" all violations. In this case, the difference with the actual cost of bringing the object to the standards may differ by an order of magnitude upward. A “secret” decision is made in favor of this company X, in the hope that the information will remain at the level of those involved in the issue. What actually happens: information, as a rule, goes beyond the scope of this circle: there are people "on the ground" who see actual actions or inactions, there are people responsible for making and controlling payments, etc. In addition, other inspection bodies perceive this as “best practices,” they have excellent “internal communication” and they are “lining up”.

It is appropriate to quote the words of IKEA founder Ingvar Kamprad (in 2008, he led the ranking of the richest people in Europe): “I have convinced all our employees that we are not giving bribes. I don’t know if this was a wise decision, but I’m sure that if we were to bribe, we would have to continue in the same spirit". Probably, many will reproach me, they say that in IKEA everything is not so smooth, we will return to this company.

In addition, we should not forget about the consequences of such "managerial" decisions, fire in trade center "Winter Cherry" when 60 people were died is an example to this (according to preliminary results of the investigation of the RF IC).

Another factor is the “smoking room news”, not a single internal communication service works as efficiently as this.

Thus, the policy of double standards is impossible to hide. This undermines the belief of most employees in the Code of Ethics and turns it into an anti-idea that acts to destroy the company. There can only be one answer: “zero tolerance” to ethical violations and readiness to uphold this principle to the end, without any “but” and “if”.

This question is always extremely painful. Moreover, there are options for its wording: “Yes, now I will lose, but in the long run it will bear fruit”, and maybe such “Now I will lose, this can lead to bankruptcy of the company, dismissal, and it’s not at all obvious what it’s like it will help me in the future.”

And so that the answer is the first more often than the second, the development of the Institute of Reputation is important. But it’s true that reputation can be really expensive.

Example with the opening of the IKEA Mega shopping complex in the city of Samara. Construction began in 2006 and was completed by 2009 with an initial investment of 4 billion rubles. Areas were leased, employees were hired, goods delivered ... A corruption scandal erupted that reached the President of the Russian Federation. The IKEA leadership took a principled position, as a result: the opening took place only in August 2011 with an investment level of 10 billion rubles. (2.5 times higher than the original). IKEA CEO Anders Dowig stopped the development of the network until “there are clear signs of improvement in a huge and often unpredictable bureaucratic system.”

For IKEA, the choice was obvious, and it should also be obvious to all companies operating in the Russian market. Otherwise, the situation will not change.

The practice in this matter is diverse: from “we never take dirty linen from the house” and all the news about us should be only in the key of our merits ”, to the position when the company never goes to internal negotiations and seeks to bring such cases to court decisions.

By hushing up the facts and avoiding scandals, the situation cannot be rectified. Of course, no one can blame a person without a court order. But attempts to hush up the “save face” scandal and move to a more responsible work with recognition of outstanding results look extremely hypocritical.

In our age of information technology, information is an extremely dynamic substance, and anti-PR policies are not always effective.

Protective measures for authors of communications should be spelled out in the Code of Ethical Conduct. And for such posts as internal audit, security, compliance, procurement, financial control, lawyers ... additional guarantees of protection should be provided. If you occupy this position, sooner or later you will be guaranteed to face facts of critical violations up to the top management of the company. And if you have not discussed the guarantees of protection upon assuming office, then do it now, before the crisis.

It doesn’t matter at all whether you work as an ordinary employee or the head of the company, the principle of a personal example exists for everyone. Of course, if you are a leader, then your personal example may be more contagious. Although this does not always depend on the position, but more often on personal charisma.

If the principles of ethical behavior are not genuinely shared by senior management, then the path may not be easy at all.

Following ethical principles is not a walk around the field with daisies. The situation may be such that it will require a choice between compromise and dismissal. Unfortunately, I observed situations when people chose the first, justifying it with responsibility to their families, loans, mortgages ..., or simply choosing personal comfort. Here everyone makes a choice for themselves.

The Chinese have the proverb "make difficult decisions easy". Its meaning is that you should already have an answer to complex questions, and when the time comes to make a decision, you will do it easily!